The Guy, the Girl, the Artist and His Ex, by Gabrielle Williams 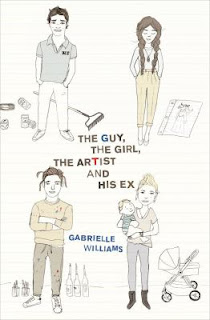 The Guy, the Girl, the Artist, and His Ex begins with a real-life incident about a mob calling itself "Australian Cultural Terrorists" who stole a Picasso, the Weeping Woman, on the 2nd of August in 1986, from the National Gallery of Victoria to draw the attention of the government to increase the funding of struggling artists of Victoria. The painting became the subject of an international manhunt involving the Australian Federal Police and yet the Australian Cultural Terrorists were never found.

The story in not all about the artwork. It's about four characters who are unexpectedly brought together by the painting, for better or for worse. They are:

-The Guy, as suggested in the title, is a guy named Guy who is flunking out of school.
-The Girl, Rafi, has been raised by her mom who's quite off the hinge since her little brother's untimely death.
-The Artist is Luke, who is the mastermind behind the whole Picasso stealing plan.
-The Ex is Penny, who somehow makes everything come together without intending to that fateful night.

What I liked most about the book are undoubtedly the well-crafted characters and plot. This book is narrated by a third-person omniscient narrator as we are shown the trajectory the lives of the main characters takes when the painting crosses their path. There were some great characters -the Bastard-Ex. was certainly a convincing bastard and the unhinged mother was both heart-wrenching and unnerving. The thing I liked best about this book was I felt like I could really tune into the emotions of the characters. I wouldn't say this book is necessarily YA -apart from the fact that many of the characters are in that age bracket - it easily works as crossover or adult fiction as well. *JK*
Posted by Oxford Public Library Teen Picks at 12:37 PM No comments: