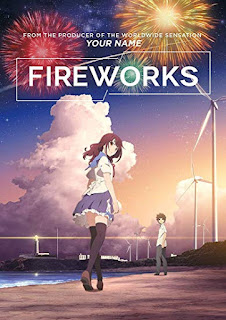 When translating a film with an already confusing plot from one language to another, the result isn't always satisfactory. And sometimes it can be a disaster. Thus was the case with Fireworks, by Studio Shaft (Your Name).

The film centers on shy Norimichi, who has a crush on the same girl as his more energetic and popular best friend. Nauzna, the girl in question, has just found out her mother is to remarry and she will have to move away from all she knows. Unhappy with the situation, Nazuna plans to run away from home, but things go awry. Norimichi uses a strange glowing sphere found in the ocean to help rewind time so his crush can escape (and just maybe they can be together). But each time he rewinds time, something goes wrong. Can the teens set the world right?

The concept of Fireworks sounded really interesting. I'm always game for sci-fi movies. Especially if they involve time travel or alternate universes/outcomes. But this one did not work for me. At ALL. The plot didn't really seem to go anywhere, and the poor execution of the time travel aspect only made things confusing (this could have much to do with language translation, however). And the characters were as cliche as can be and seemed ripped straight from the pages of a John Green novel, but with far less depth: Shy male protag, manic-pixie-dream-girl love interest, funny/goofy best friend. Side characters were no more than placeholders. 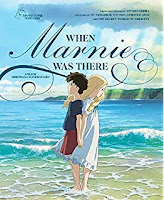 As excited as I was watch Fireworks, I was disappointed in the reality of it. And, admittedly, turned the film off about 2/3 the way through. Perhaps things came together in the end and everything made sense, but at that point I didn't care anymore. For a better Anime film, try When Marnie Was There or The Tale of Princess Kaguya. --AJB 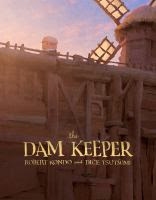 Sunrise Valley is an oasis within a post-apocalyptic world. Outside its walls awaits death and decay, brought on by a toxic black fog that attacks the walls every few days. The only thing that keeps the fog (and certain death) at bay is the windmill stop the wall.

Young Pig is the Dam Keeper. Like his late father before him, Pig's task is to maintain the windmill and its daily operation, ensuring the safety of each and every resident of Sunrise Valley. It's a lonely and thankless job. In fact, Pig's father couldn't take it and walked into the fog. And it is a daily battle for Pig to not have the same fate.

One day after a particularly violent fog storm (which destroys the windmill), Pig, his best friend Fox, and his nemesis Hippo become trapped miles outside the wall. It is a race against the clock as they must now get back home and fix the dam before the fog returns. But the world outside the wall may not be what they thought... What will Pig, Fox, and Hippo do when they learn the truth?

The first volume in Robert Kondo and Dice Tsutsumi's The Dam Keeper trilogy is incredible! Although there is very little dialogue, much is conveyed through the story's beautiful artwork. I loved everything about this series: The highly original story, the characters, the humor, and, of course, the art. I've already read Book 2 and am anxiously awaiting the third and final installment, which comes out in July 2019.

Opposite of Always, by Justin A. Reynolds 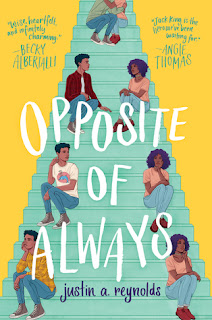 What if you didn't like how a story ended? What if you got a second chance to try and make it right? I'm not talking about the sort of second chances where you mess up, sincerely apologize, and get put on probationary forgiveness until you prove you won't mess up in the same way again. I'm talking about a real do-over that can only happen with...

This is what happens to Jack when he meets Kate, falls in love, and then Kate dies from a rare genetic blood disorder. Not just once, but many times. So many times Jack loses count. At first Jack thinks he's getting sent back in time to save Kate's life, but what if that's not it at all? And what if, by preventing Kate's death, something bad happens to someone else he knows? What if his actions only make things worse for everyone (like, apocalypse-level worse)? Jack better figure out exactly why he's stuck in this time loop, and he better do it soon. Otherwise, he may be there forever. And that would be a bad thing.

Justin A. Reynolds' debut novel Opposite of Always is kind of Groundhog Day mashed up with Butterfly Effect. And don't let the happy yellow cover with the cute happy couple fool you. This is NOT a light, fluffy love story. And the ending isn't exactly a happy one, although it is realistic...as much so as a story about time loops can be.

When I first heard about Opposite of Always, I was intrigued. The concept of time loops is a pretty well-explored trope, and didn't think there would be anything new (there wasn't), but I still wanted to read it because I enjoy me a good time travel story. And it was...pretty good. A bit long for what it is (like, the story could have been condensed by 150 pages). And the characters were pretty much cliche John Green (sensitive boy with Issues meets Manic Pixie Dream Girl with Tragic Secret). Still, I liked it. And I think the target audience will too.

--AJB
Posted by Oxford Public Library Teen Picks at 10:29 AM No comments: