Stuff That Sucks, by Ben Sedley 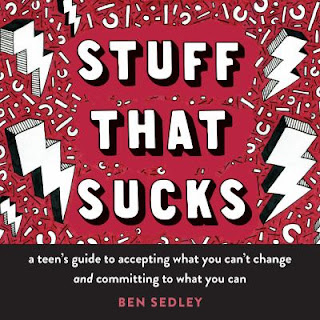 You fail an exam you studied really hard for (because who knew the teacher would test you on THAT?!?). You have an argument with your BFF over something stupid. Your parents just don't get it. Maybe you just feel sad or worried or alone for reasons you don't even have words for. The feeling just sneaks up. Maybe you get angry about something that happened and just can't let it go.

And in a society so focused on being happy, putting that best appearance forward, and hiding any negativity behind a smile (no matter how fake), especially when you feel NOT happy... That... Well, that sucks!

Ben Sedley's short and sweet book Stuff That Sucks is full of exercises and advice about how to acknowledge those bad feels (yep, embrace 'em) and then move on by focusing on what's really important in life. It may sound a little fluffy, but actually some of the articles are pretty good. There's solid advice in here.

Stuff That Sucks may not give you an instant cure for the bad feels, but it will make those bad feels not so...sucky. 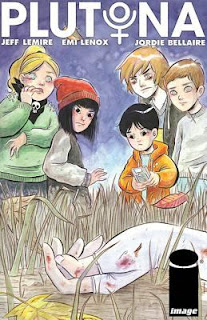 In this dark and twisted tale by the team of Lemire, Lenox & Bellaire, five misfit teens, each one dealing with their own personal issues, stumble across the body of local Superhero Plutona while exploring a local wooded area. Plutona is most definitely dead, having lost a battle with the diabolical super-villain, The White Wasp. Worried about the consequences should word get out that their city's resident superhero is no more, the teens promise to keep quiet. They will sneak back later that night, bury the fallen superhero, and then decide what to do.

Except one of them has other plans for Plutona. And it's pretty creepy!

Alternating between how each of the teens is coping with this terrible secret and Plutona's final moments, this is not so much a superhero story, but one about the dark side of human nature and just how far one desperate teen will go to acheive unlimited cosmic power.

I initially picked up Plutona because I heard it described as a modern-day Stand By Me, a movie I loved from my childhood (SBM Plot: Four teens run away from home to find the body of a local boy who was supposedly hit by a train). And it did remind me a bit of the film. Except Plutona was even darker and more disturbing. And it was awesome. The character development, the plot twists...everything. It was awesome.

I wouldn't recommend Plutona for younger teens or someone looking for a light read, but this one will definitely have its audience! --AJB

Posted by Oxford Public Library Teen Picks at 10:39 AM No comments: 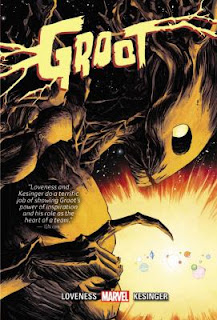 I'm not really a huge fan of traditional Superhero-type comics, preferring to read the more unique stories...like Lumberjanes or Giant Days. Or Nimona. Yeah. Nimona. That one was awesome! Stuff that doesn't adhere to the normal Superhero/Super Powers storyline. But I do have a weakness for Groot. That's right, Groot. As in "I am Groot." This character alone is one of the main reasons I enjoyed Guardians of the Galaxy as much as I did.

And the graphic novel/comic team of Jeff Loveness and Brian Kesinger did a most excellent job of crafting an adventure for this character of big heart and small vocabulary.

It all begins when Rocket is kidnapped by a ruthless bounty hunter. On the journey to rescue his best pal, Groot has many adventures (like defeating alien sharks saving an entire planet from a dangerous electrical monster that would consume everything in its path) and makes a bunch of new friends. And does Groot finally rescue Rocket? You bet!

So far, Groot has been one of my favorite graphic novels I've read so far in 2017. Recommended for fans of Guardians of the Galaxy and, really, anyone!

--AJB
Posted by Oxford Public Library Teen Picks at 10:17 AM No comments: 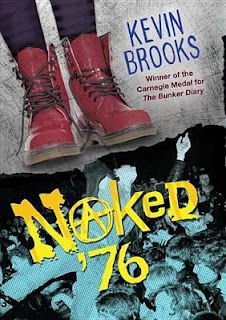 Lili Garcia never really stood out among her peers. She plays clasical piano (and is quite good), makes decent grades, is ok at small talk (although she doesn't really have any close friends). She was one of those people who was just...well, there.

That is, until the day Curtis Ray, gorgeous, rebellious, and infamous, took notice and recruited her to play bass for his punk band, Naked. That day Lili had been holed up in her high school's practice room, working through a particularly difficult piece. Although she had never played bass before (and, really, never even considered it), Lili was drawn in by Curtis' charm (who wouldn't be?) and agreed to audition. Turns out she's a natural. Plus, the first time she plays, she literally bleeds all over the instrument (SO punk rock, btw!). It isn't long before Lili and Curtis are an item. Lili doesn't agree with Curtis' drug use or like many of the people he hangs out with, equally shocking and rebellious people who are part of the "scene," but she goes along because she is Curtis's girlfriend and that's what is expected of her. And she's too awed (and sometimes appalled) by everything to speak up. Besides, NO ONE dares to contradict Curtis. Because he's Curtis.

It isn't long before Naked is one of the most popular local bands, and Curtis' lifestyle becomes even more wild and unpredictable, embracing the Punk scene for everything it is. This strains things between him and Lili, and it isn't long before Lili meets William, another musician who seems everything Curtis is not. And maybe everything Lili really wants. But William is hiding things. Things that could make him even more dangerous than Curtis.

What initially attracted me to Naked '76, by Kevin Brooks was that the protagonist was a girl bass player. I myself am a female bassist. And, much like Lili, I'm the sort who kind of blends in (and doesn't mind doing so) and would rather hang back than be the life of the party (IF I can even be persuaded to attend the party). Although I've never been a Punk rocker myself, prefering the more laid-back genres of Blues and Classic Rock (60s, 70s, 80s), I enjoyed reading about the Punk Scene of the late 70s-early 80s. Brooks paints a realistic picture of the edginess, grit, and shock value as seen through the eyes of someone new to the scene...and perhaps someone who never got fully involved despite playing the music. Characters were realistic and believable. Overall, an interesting read.

So You've Read 13 Reasons Why. Now What?

So you've read 13 Reasons Why by Jay Asher. And you've been loyally following the Netflix series based on the book. Maybe you've even discussed one (or both) at school.

So now what? Here are some choices:

Before I Fall, by Lauren Oliver: Here's another to read before you watch the movie. Pretty and popular Samantha must relive the last day of her life in order to get it right. She may not be able to save her own life, but perhaps she can save that of a troubled classmate.

Wintergirls, by Laurie Halse Anderson: Lia, who has been battling severe eating disorders for the past several years, learns her former best friend has been found dead, possibly from a suicide. The worst part? Cassie called Lia several times before ending her own life. Haunted by guilt, Lia copes by descending deeper into her own illness.

If I Stay, by Gail Forman: Mia is in a coma, the only surviver of a car crash that killed the rest of her family. As doctors fight to save her life and her boyfriend waits by her bedside, Mia must decide: Does she really want to return to her life? Or should she join her family in death?

We Were Liars, by E. Lockhart: Something beyond awful happened to Cady when she was only 15. Now 17, she battles crippling migranes and severe amnesia...all because of what happened/was done to her (she isn't sure which it is). With the help of her cousins and crush, Cady struggles to recall the events of that fateful night and, hopefully, finally begin healing.

Perks of Being A Wallflower, by Stephen Chbosky: Through a series of letters, this tells the story of Charlie's Freshman year and his struggles to make friends and overcome a childhood of abuse and the death of a family member. This one also inspired a movie some years back (starring Emma Watson of Harry Potter/Beauty and the Beast fame), but read the book first.

All The Truth That's In Me, by Julie Berry: Four years ago, Judith and Lottie were kidnapped. When Judith escapes and returns to her small, close-knit village, she is unable to speak. She must find a way to communicate the identity of her abductor before he strikes again. Or before something even worse happens.

Hate List, by Jennifer Brown: Val's boyfriend, Nick, brought a gun to school and opened fire, killing several people before turnining the gun on himself. Val feels partly responsible for what happened because of the "Hate List" (a list of all the students and teachers who they feel wronged them) she and Nick compiled, the very list Nick used to target his victims. Not only must Val deal with  the authorities questioning her and her classmates shunning her. She must also cope with her own guilt.

We're here to make sure you fulfill all your reading needs! --AJB
Posted by Oxford Public Library Teen Picks at 1:41 PM No comments: 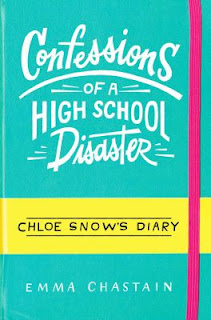 Chloe Snow's story was told through a entry in her diary everyday - it all begins just before freshman year of high school, Chloe Snow has high hopes, new year new school, she has expectations to live up to one of which is to have her first kiss - and since everybody else has and already on second base, she feels she need to have it by New Year's Eve. Along the way she meets the heartfelt Tristan, her best friend and not so nice people as well. Her freshman year takes her on a journey of self discovery, facing new challenges and also exceeding her own expectations but at the end of the day she realizes it's about being herself.

Chloe Snow reminds me a bit of me - I think we all have those thoughts about boys, friendships, school life at that age. Chloe isn't a stranger to making bad decisions, and she messes up a lot which you will get annoyed at, but it's her quirks and redeeming qualities that make her who she is. What I loved was that aside from the funny, the cringe and the constant smile you display on your face when you are reading, it also focused lightly on the serious of your teenage years too.

I hope we see Chloe Snow a lot more - I would love to go through her sophomore and senior years and see what other trouble and cringe worthy moments she gets into. Confessions of a High School Disaster is ingeniously funny and every teen girl should read it! *JK*
Posted by Oxford Public Library Teen Picks at 12:18 PM No comments: