Admittedly, I'm not a big fan of traditional Manga. I find the whole right-to-left format extremely confusing. More so than should be for a book that's mostly pictures. And that diminishes my enjoyment of the story at hand. I'm missing out, I know. But that's just how it is for me.

But I could not resist Plum Crazy by Hoshino Natsumi.

Admittedly what drew me in was the cover. More specifically, the tabby-and white cat on the cover. This kitty looked so much like my kitty (Gizmo) I had to see what it was all about. And I was very pleasantly surprised. Because the story was cute too.

The story focuses on Plum, a cat owned by a single mother and her son. Mom has a dance studio and Plum spends her days having adventures and tolerating all the petting and and attention from the dance students (Because who can resist a cat that cute? Yeah...me either). One day Plum brings home a starving kitten, later named Snowball, and the story picks up from there. As Plum and Snowball adjust to each-other, and as Plum learns to tolerate all the kitten antics, the two become buddies.

All in all, the story is very cute. Much like Chi's Sweet Home. And it seems to target a younger audience. However, I would recommend it to cat lovers of any age. Because who doesn't want to read a cute cat story.

Posted by Oxford Public Library Teen Picks at 11:32 AM No comments:

For Fun Friday: Flowers in the Attic, by V.C. Andrews

I read on another bookish blog that VC Andrews' cult classic Flowers in the Attic is celebrating 40 years of being a Guilty Pleasure Read. So I thought I'd blog about it today. Because why not?

I first read Flowers when I was 12. It was one of those rare books on my parents' "forbidden" list, so of course I secretly borrowed it from a friend (thanks, Julie!) who has secretly borrowed it from her mom. And I just as secretly read it with just as much relish as a tween of today would devour Harry Potter or Hunger Games. So lots of secrets going on. I'm sure my parents were 100% aware of what was going on, but figured my breaking a "don't read this book yet" rule was far better than any other shenanigans I could be getting into. It WAS the 80s, after all.

Looking back, I'm not sure what the appeal was. It's really quite a terrible book, filled with cliche characters, overdone tropes, and absolutely NO plot or literary merit to speak of. Pretty much every Andrews book ever written. The fact that the book was taboo, certainly, added some appeal. But it was also my first encounter with an "adult" book. And that was exciting too. Naturally much of the  more 'mature' content sailed over my head at the time (And of course I couldn't ask my folks about it because I wasn't even supposed to have the book. And Google didn't exist back in 1989). All I knew was, at the time, I loved the book with all my tweenage heart.

For those who have not yet read Flowers, I'll sum up without giving too many spoilers:

Here we have four siblings: Chris, Cathy, Carrie, and Cory. These much-too-beautiful blonde children were the product of a forbidden marriage. When their father dies, Mom moves the fam back in with her super-rich parents. The catch is her elderly father (who is supposedly dying) must not know about the children since it was he who forbid the marriage in the first place. So the kiddos are stashed in the attic, which was actually pretty posh as far as attics go (and was likely larger than my first apartment). They are cared for by their Grandmother, who shows the children far too much animosity and resentment than is called for (if you read the Flowers prequel, you'll sort of understand why). There's drama, there's romance, there's drama, there's secrets, there's drama... And more drama. And MORE drama. And there's a Plot Reveal you'll see coming a mile away.

Still, Flowers in the Attic is what could be called a Cult Classic. And we do have the series in the Teen Area. If you're curious and want to read something that doesn't require much mental capacity, go ahead and see what it's all about. But then follow it up with something a bit more meaty.

--AJB
Posted by Oxford Public Library Teen Picks at 10:42 AM No comments:

You may know Lucy Knisley for her online comics about the ups and downs and dramas of family life and raising a toddler (the ones featuring her old cat, Linny, are especially cute). But before she was a mom, Lucy was a culinary aficionado. I assume she still is.

Lucy's first major graphic novel Relish is a journey into her lifelong relationship with food. The daughter of a chef and gourmet food critic, young Lucy didn't have much of a choice but to become somewhat of a food snob herself (with the exception of a teenage rebellious streak that found her noshing on such things like McDonalds, Pop Tarts, and blue ketchup...much to the horror of her folks). Chapters discuss Lucy's experiences with with City Living, Farm Life, world travels and more (the one where she and a childhood friend explore a small Mexican town is my favorite). Mixed in are some of Lucy's favorite recipes so you, the reader, can enjoy the same foods as talked about in the book. So I guess you can say the book has an interactive element as well.

Relish can be found in our Graphic Novel section. I highly recommend this one! Ask the librarian if you need help locating it.

--AJB
Posted by Oxford Public Library Teen Picks at 11:15 AM No comments:

The Geeky Chef, by Cassandra Reader 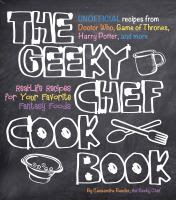 Say you're binge-watching the Harry Potter movies and suddenly find yourself with a craving for Cauldron Cakes (or maybe Butterbeer). This craving is such you can't even enjoy the films until you taste what these treats are all about. But how would one obtain such delicacies? Outside of Diagon Ally or the Hogwarts kitchens, that is. Hmmmm....

While I can't tell you how to go about getting your own House Elf to whip up such yumminess for you on demand (and I wouldn't if I could, because I agree with Hermoine that House Elves should not be treated as slaves), I CAN recommend The Geeky Chef Cookbook, by Cassandra Reader.

Within the pages this fun book, you'll find the author's well-researched takes on recipes from nearly ALL your favorite cannons: From Harry Potter to Hunger Games, from Star Wars to Star Trek, and everything in between. You'll find beverages, main dishes (I've actually tried the "Gagh", pg. 92-93. And, as I'm a fan of spicy noodle dishes, I found it delicious), snacks, and, of course, desserts (YES! They have cauldron cakes), all of which sound positively mouth-watering. I'm looking forward to sampling more recipes from my favorite books and movies. I think you'll have fun with this one too. 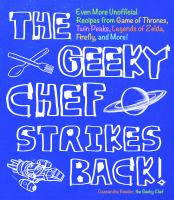 But wait! There's more! If you can't find what you want in The Geeky Chef, try the sequel, The Geeky Chef Strikes Back, for even MORE delicious recipes.

Drama Monday: We Are Okay, by Nina LaCour

Mondays are for Drama (because why not), and what better choice than one of Nina LaCour's gems? Everything I've read by Nina LaCour has been awesome! She is expert in crafting plot and characters and weaving them together for maximum feels. And the perfect choice for December is We Are Okay.

Marin has decided to stay at college for Winter/Holiday Break. After the death of her beloved grandfather summer of Senior Year (and everything that happened afterward), she doesn't really feel like she can go home. She's not sure 'home' is even 'home' anymore. So she will be staying on campus. Alone. Except for a short visit from her best friend Mabel...whom she hasn't even spoken with much since everything went down (and whom she's not even sure is her best friend any longer). When Mabel arrives, Marin knows she will have to face the events that caused her to flee California for New York, never looking back (but trapped in the past just the same). Mabel will demand answers. And when the snow starts to fall and the power goes out, the girls have no choice but to talk.

We Are Okay is a quiet story. That is, there isn't much action or adventure. But the setting (a desolate college campus, a snowstorm) and the emotions (grief, loneliness, healing) are everything. Flashbacks scattered throughout gradually build the foundation of what brought Marin to the place she is and give hints to how she will be able to heal from what she experienced (no spoilers, sorry). This truly is a gorgeous story!