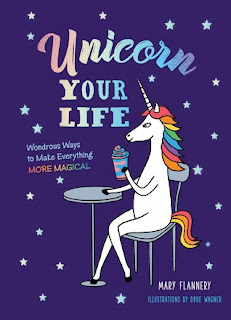 All you have to do is look around to see Unicorns are what you'd call "trending" right now. They can be found everywhere from T-Shirts to menu items at your favorite coffee shop (💗Hello!Unicorn Frappuccino!💗) to right here in the OPL Teen Department (of course we Teen Librarians loved these magical creatures before they became a thing). Unicorns may once have been a rare, once in a lifetime encounter, but nowdays they're everywhere! And we think that's just awesome!!

Unicorns are the best!! So it goes without saying that we'd have plenty of books featuring them. One such being Unicorn Your Life by Mary Flannery. This adorable, rainbow-colored book is not so much about these creatures, per-se, but a guide to living your best, most magical life possible, whether at work, at home, among friends and family, or just being YOU(icorn). There's even advice on how to deal with such undesirable, but unavoidable, creatures as Ogres and Vampires, who would try to bring you down and suck every drop of magical energy from your sparkletastic aura. As in What Would A Unicorn Do?

Unicorn Your Life is filled with fun, whimsical advice. Most is common sense and has been delved into way more deeply by other books. So you've heard it all before. But are those other books even as half as fun and colorful? I think not! So if you want an instant pick-up, grab Unicorn Your Life and get ready to start living your most magical life ever and feeling like the sparkly Unicorn you are!

I love this one!!

Yesterday's book was based on historical events. Today's centers around an alternate future and falls under one of my favorite genres, Science Fiction. 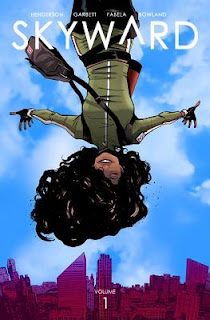 The premise of Joe Henderson's new graphic novel series, Skyward, is what happens after the Earth's gravity is suddenly reduced to a fraction of what we know it to be. Sounds cool, right? Being able to fly through the air with the greatest of ease, not unlike Superman... But what about being sucked into the vacuum of space and not being able to control it? Doesn't sound so fantastic anymore, does it?

Willa was only a baby when G-Day happened. Her mother, who was out for a jog when things went haywire, was lost...sucked up into the sky. Her father, who witnessed the event from the safety of the family home but was powerless to do anything about it lest he meet the same fate, has never been the same. Now, 20 years later, the world is a different place. Magnetized technology is available to the elite, while the majority of society must rely on weighted belts and other, less dignified methods, to keep from flying into the sky.

But Willa's father and his former partner, Roger Barrow, know what caused the Earth's gravity to do what it did...AND they know how to restore it, and society, to what it was before G-Day. Willa goes in search of Barrow, who has made a fortune on Magnetized gear. She hopes that if he and her father partner up once more, they can fix the planet. But Barrow, she learns, has much to lose from returning things to how they were. Too much to lose. And he will do anything to stop Willa's plan.

I first heard about Skyward months ago but forgot about it until I saw it on the New Books shelf this morning. I'm always game for a story with a unique and interesting premise, and this one fit the bill perfectly. Naturally, since this is a series, things left off on a pretty big cliffhanger. I look forward to reading the next volume, which, happily, has already been published.

--AJB
Posted by Oxford Public Library Teen Picks at 11:15 AM No comments: 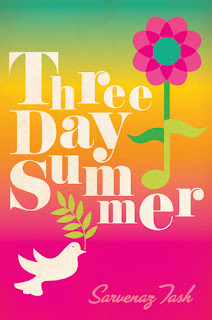 Today's Throwback is a Throwback in more ways than one: Because it was published in 2015 (so not really a NEW book) and because it is set in 1969, at perhaps the most historically significant musical event, well, ever: Woodstock. The original.

Three Day Summer is a fun, summery story by Sarvebaz Tash, author of The Geek's Guide to Unrequited Love (which, if you haven't read yet, go do it NOW...but not before checking out the book featured in this review). It centers on a blossoming romance between Michael and Cora, two teens who meet-cute when Michael falls ill and is taken to the medical tent where Cora is a volunteer. They become friends and then become more as they get to know each other.

Three Day Summer is most definitely a character-driven story. The alternating viewpoints give insight into the minds of Michael and Cora and to the events, hopes, and dreams that led them to be where they are and who they are when we, the reader, encounter them. And the festival is like a character itself. The author, who obviously did her research about the featival, added lots of little details to put the reader right in the rain-soaked fields of Mr. Yasgur's farm. Also included are little historical details about Vietnam, the hippie movement, and the state of the country during that time period. All of this really helped to set the tone of the story.

This one is for music lovers and for anyone looking for a quick, fun romance. You can find Three Day Summer on our fiction shelf. Or ask for it at the Teen Desk and we'll track it down for you. I recommend it. It's totally groovy! --AJB

Posted by Oxford Public Library Teen Picks at 10:45 AM No comments:

The Big-A$$ Book of Bling, by Mark Montano 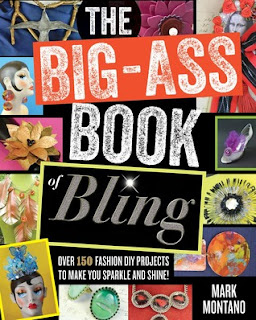 I love looking through craft books! Especially ones that show you unique and quirky ways to re-purpose old stuff. Mark Montano's Big-Ass Book of Crafts has been a favorite for years, and I always enjoyed going through it while looking for potential program ideas. When it was on the shelf, that is. And more often than not, it was checked out. Would I actually make and use anything in that book? Honestly...no. But it sure is fun to see what this master Recycler would do with this or that.

So when I found out there was a follow up to Book of Crafts, I had to recommend it. I was sure Big-Ass Book of Bling would be just as popular as its companion. And I don't think I'll be wrong. I had the chance to page through it this morning, and absolutely everything in it is fabulous! Fabulously atrocious, that is. In the best possible way! This stuff is tacky, obnoxious, and Bling-y enough to make Lady Gaga positively chartreuse with bling envy. This book will be the perfect inspiration for an Ugly Craft Night program we're planning sometime in the definite future. (So stay tuned!)

--AJB
Posted by Oxford Public Library Teen Picks at 11:26 AM No comments:

William Shakespeare's Get Thee Back to the Future, by Ian Doescher 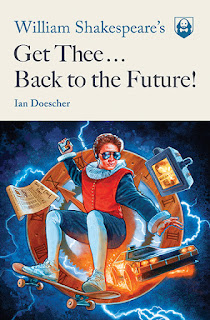 I fully enjoyed Ian Doescher's Shakespearean spins on the Star Wars saga. Even the ones inspired by later movies (Because any Star Wars Superfan will tell you that the only true films from this series are Episodes 4-6. There are things--and characters--in episodes 1-3 of which we shall not speak. And the later episodes, while fun and action-packed, strike me as more Fan Fiction than Cannon). So imagine my excitement when I learned this very same author had published a tome of similar format based on one of my absolutely favorite 80s movies, Back to the Future!

William Shakespeare's Get Thee Back to the Future is everything I could have hoped for. As with the Star Wars books, this tells the classic story of Marty McFly's journey (via time-traveling DeLorean) to the the year 1955 to save his friend and reunite his parents, thus ensuring he and his siblings will be born. All  the iconic scenes are there and written in traditional Shakespearean style, complete with iambic pentameter and minimalistic stage directions. The Bard would be proud! This one did not disappoint!

Also, if you're a fan of the film like I am, you'll notice little Easter Eggs and references hidden throughout the book. But I won't tell.You'll have to discover them for yourself.

The verdict is this book was highly enjoyable and I can absolutely recommend it. Especially if you're a fan of classic 80s films.