Jennifer E. Smith's third novel is about all the little "what-if's" that lead up to major crossroad moments in life.
And it is a multitude of these "what-if" moments that prevent Hadley Sullivan from arriving at the airport on time to catch the plane she would have taken to London to attend her father's wedding to her new stepmother--a woman Hadley's never met (and would really rather not meet. ever.). But if she hadn't been late, she wouldn't have had to catch a later flight. And then she never would have met Oliver, the hot English boy who has the seat next to her's. The two hit it off immediately, but lose track of each other once they reach their destination. But several serendipitous situations have them meeting again and again over the next 24 hours. By the end, Hadley and Oliver are in love. Additionally, both teens have made peace with their respective family drama issues by the book's conclusuon--albeit a little too easily. But there are happy endings all around (and happy beginnings). And really... How can you NOT like a feel-good book like that?
The Statistical Probability of Love at First Sight read like the script for a romantic dramedy movie. On the screen, it would likely be a big hit along the lines of chick flick classics like Say Anything or Serendipity. Unfortunately, it wasn't particularly exciting when presented in text format: Much too word-y where actions and thoughts would've worked better shown rather than described in detail. And there should've been a flashback montage somewhere in there. One set to a cheesy love ballad (perhaps a remix/remake of a formerly-popular 80s pop song?).
Overall, though... Entertaining. And a good concept. --AJL
Posted by Oxford Public Library Teen Picks at 1:37 PM No comments: 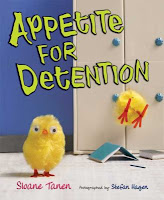 Adorable chicks made from pipe-cleaners and google eyes express all the angst, drama, and heartbreak that is middle school in Slone Tanen's Appetite for Detention. Follow the many interwoven storylines featuring the stereotypical characters you'd find in any middle school: popular girl, wannabe, jock, geek, fat kid, rich kid, GLBTQ, and a few who defy labels and/or don't really fit in with any clique as they go back to school.
Hilarious! If you're still in middle (or high) school, you'll relate to what the characters are going through. If your middle (and high) school days are behind you, you'll laugh (cry?) at the memories this book will bring up. --AJL
Posted by Oxford Public Library Teen Picks at 1:16 PM No comments:

Caroline B. Cooney's Three Black Swans reads like the plot of a Lifetime Original Movie (or an After School Special): Lots of drama and angst, but not much basis in true reality.
As part of a school assignment on the power of hoaxes, cousins and BFFs Missy and Claire (who share an uncanny resemblance--even for relatives/cousins) decide to record a video about being long-lost twins who have just reunited. All fake, of course. Or is it? The video is extremely convincing and, you guessed it, makes it to YouTube where it quickly gets hundreds of hits. Soon the video is seen by Genevieve, a third teen who looks exactly like Missy and Claire. Many tear-stained, drama-filled discussions with parents later, the three girls learn the truth about themselves: They are actually triplets who were separated at birth! Family secrets and shocking revelations abound!
Predictable, but if you like stories with lots of drama, you'll love this one! --AJL
Posted by Oxford Public Library Teen Picks at 7:21 PM No comments:

Sara Zarr explores the healing process in her newest novel, How to Save a Life.  Still not recovered from her father's death almost a year earlier, Jill hides her pain behind anger and bitterness toward the world.  Then Jill's mom decides to adopt a baby from Mandy, a pregnant teen she met on line. Mandy will be staying at Jill's house until the baby is born. Jill feels her mom is trying to replace her father and doesn't trust Mandy at all. Meanwhile, Mandy has her own problems: Her mom, a former teen mom, doesn't even try to hide the fact she believes Mandy messed up her life by being born. Additionally, Mandy fears her own child might be the result of the abuse she suffered at the hands of her mother's live-in boyfriend. Can Jill and Mandy learn to live with each other? And can they heal from past hurts and move on to a better future?
Although the story wraps up a bit too "happily ever after" for a piece of realistic fiction, this is nonetheless a satisfying read. The highlight is the excellent character development, which is what drives the story. Recommended for teen girls looking for something other than vampires, werewolves, and faeries. --AJL
Posted by Oxford Public Library Teen Picks at 1:08 PM No comments:

A Message from the Future

Miranda, 12, is used to the perils and quirks of New York City. There's the gang that hangs out on the corner, the crazy homeless man who sleeps under the mailbox and kicks his foot at passing cars, the mean bakery owner who hates kids... Then one day everything changes. Miranda's best friend, Sal, gets punched for apparently no reason. And all of a sudden, Sal stops wanting to be Miranda's friend (also for no apparent reason). As Miranda deals with the pain of losing a friend, she begins to receive mysterious and cryptic letters. The first reads "I am coming to save your friend's life and my own." It eventually becomes apparent the letters are being sent by a visitor from the future. But who is sending the letters? And what could they mean? Miranda could never have predicted what happens next...
When You Reach Me by Rebecca Stead is a winner of the John Newberry medal and is one of OPL's 6th Grade Battle of the Books selections for 2012. This intriguing story is at the same time mystery, science fiction, and coming-of-age. After reading this one, if you haven't already, you may also want to check out Madeleine L'Engle's Wrinkle In Time, which features prominently in Stead's novel. --AJL
Posted by Oxford Public Library Teen Picks at 3:56 PM No comments:

Small as an elephant

When eleven-year-old Jack crawls out of his pup tent on the first morning of his camping trip with his mom in Acadia National Park, he notices right away that something isn't right.  Where is his mom's tent, and their rental car?  And where is his mom?  Any other kid might panic, might even go to the police.  But Jack isn't like other kids.  And his mom isn't like other moms.
Jack sets out alone on a quest to find his mom.  Then, just to get back home.  Along the way he finds help in unexpecxted places.  Small as an elephant is a beautifully written story of love, courage and bravery.  KR
Posted by Oxford Public Library Teen Picks at 3:11 PM No comments:

When Sapphy's father disappears at sea on Midsummer Eve, she refuses to believe he drowned. So when her brother Connor starts spending more and more time at the cove, Sapphy follows. What Sapphy and Conner discover is there's another world existing beneath the waves. The world of Ingo, where new friends and extraordinary adventures await. Now neither one wants to go back to their old life--and maybe they don't have to. But when divers threaten the sacred boundry between the world of Air and the world of Ingo, Sapphy and Connor must decide where their hearts truly lie.
The first in an extraordinary new series by author Helen Dunmore, Ingo introduces an imaginative new world and interesting new characters. Fans of fantasy and adventure will be pleased with this one! --AJL
Posted by Oxford Public Library Teen Picks at 3:31 PM No comments: 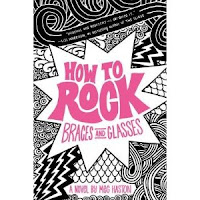 Uber-stylish IT Girl Kacey Simon doesn't think it's a bad thing to act superior to everyone she encounters. And on her weekly advice show, Kacey is known for being harsh (at best). Even her BFFs aren't immune to her cutting comments. Then the universe delivers Kacey a steaming, heaping helping of Karma. An eye infection (thanks to her designer contact lenses) and a trip to the dentist leave Kacey sporting thick glasses, braces, and a lisp. Suddenly Kacey possesses every outward quality she always dissed in others--and her peers oh so eagerly turn against her. Overnight, the Queen of Cool becomes the Biggest Geek in School. But before she can reclaim her popularity, Kacey must learn How to Rock Braces and Glasses--and how to treat people better. Otherwise, she'll be forever doomed to the bottom of her school's social food chain.
A cute story, although about as unpredictable as an after school special. Kacey is a difficult character to like for much of the book. It was it hard for me to really sympathize with what she was going through. There were some humorous parts, though. And Kacey eventually learns her lesson and becomes a better person. Fans of "Mean Girl" books will enjoy this. --AJL
Posted by Oxford Public Library Teen Picks at 7:37 PM No comments: