Cast No Shadow, by Nick Tapalansky and Anissa Espinosa 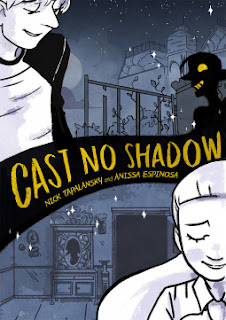 Greg lives in Lancaster, a town known for tourist trap oddities. Like the world's largest hairball (sorry, but eww!) or Miss Star's Psychic Karaoke. But perhaps the biggest oddity of all is Greg, who was born without a shadow. But being the local freak is the least of Greg's worries. Ruth, Greg's father's girlfriend, has moved in. And Greg takes this to mean his mother (deceased) is being forgotten, erased. Also, Greg's best friend Layla has began dating his nemesis. Needless to say, Greg is dealing with a lot of personal drama, a lot of feels, and none of it is good. Greg is beginning to think NO ONE gets him.

Then Greg meets Eleanor while exploring the old, abandoned Turner Mansion, and finally feels like this is someone he can be friends with. Maybe more. The only catch is Eleanor is a ghost, doomed to haunt the house until the end of time. And Greg is the only one who can see her. So that adds to his weirdness in the eyes of everyone else.

Just when Greg is finally feeling happy for the first time in a while, his shadow is unleashed. And this is no ordinary shadow, but a destructive force determined to destroy the town. There's only one way to stop it, but it will require a big sacrifice.

Admittedly it took me a while to get into Cast No Shadow, mainly because the narration was really confusing. Was it Eleanor? Greg's shadow? Greg? Some unidentified and all-knowing third-person observer? It wasn't obvious to me until much, much later in the book. And that took away from my enjoyment of the story, somewhat. Additionally, some of the action sequences didn't translate so well to print/still pictures, leaving me with a "What just happened here?" sort of feeling. But despite all that, I DID end up enjoying the story. And BONUS: Happy Ending for Everyone (The final scene literally shows the characters walking off into the sunset. I guess to show they all have perfectly normal shadows).

I'd recommend it. --AJB
Posted by Oxford Public Library Teen Picks at 11:11 AM No comments: 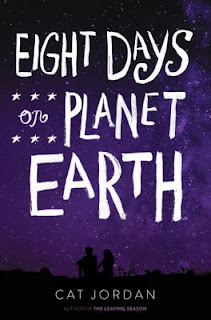 Eight Days on Planet Earth is down-to-earth yet it's magical, funny, and a little heartbreaking.

Matty Jones has grown up knowing the field he lives next to is a little different. Matty's father claims that a spaceship landed there on the night he was born. But Matty's father has since run off with his brother's sister, leaving Matty and his mother alone, so Matty isn't all that inclined to listen to what his father believes. When a strange girl suddenly appears in Matty's field claiming to be from another planet, waiting to be collected by a spaceship, Matty knows it can't be true. But there is something so ethereal about Priya  that she starts to change Matty's view on life, the universe and even love.

It wasn't until I reached the very end of this book that I actually started to understand it. For most of this story I expected a spaceship to land in Matty's field and colllect the celestial Priya. But this book is actually a contemporary novel - real life, real world issues. It is just like it claims in the synopsis - about life, the universe and love. The ending of this book is beautiful but it also has a surprising twist. I didn't see it coming and it changed everything about how I viewed this book, the characters and their actions. The surprise is actually the best part, so I'll stop here.

This book is written from Matty's perspective across eight strange and life-changing days, which enables the reader to burrow into Matty's head and heart.
Eight Days on Planet Earth wasn't what I was expecting, but instead was a delightful and moving surprise. It is perfect for readers who enjoy contemporary novels about romance, family, self-discovery, tearjerkers and that something special that is just a little otherworldly. *JK*