The Heartbreakers, by Ali Novak 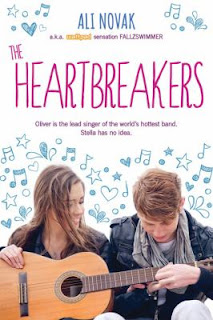 If it weren't for her sister, Cara, Stella never would have been caught at a Heartbreakers autograph signing. She hates that band! But Cara is deathly sick and the Heartbreakers are her favorite band. So of course Stella wants to do something extra special to lift her sister's spirits. Thankfully, the whole experience is made easier when Stella meets a cute boy at Starbucks before the signing and sparks fly. Unfortunately they part ways before exchanging info (or even names). Stella doesn't count on seeing him again at the autograph signing as one of the band members! Turns out Starbucks Boy is none other than Oliver Perry, singer and guitarist for The Heartbreakers. Could things get any more ironic?

Stella and her brother, who came with her to the signing, end up at the same hotel as the Heartbreakers and bump into them in the elevator. One thing leads to another and, before Stella knows it, she's hanging out with the band and kissing Oliver. Then she's joining the band on the road as their official photographer and blogger.

Things continue predictablly from here. Stella and Oliver's relationship heats up...only to be shut down by the band's manager, who forbids the boys from dating in order to "increase fan appeal." Cowardly Oliver lets it happen and regrets it. Stella is naturally heartbroken. Things, of course, work their way out by the end of the book and everything is peachy. Even Cara's failing health begins to turn around.

The Verdict:
The Heartbreakers, by Ali Novak reads like the script for a teenage chick flick: It's cliche, it's predictable, it's packed with stock characters doing stock things...BUT, like a cheesy rom-com, it's sweet, satisfyingly enjoyable, and a true guilty pleasure to read. Fans of Jenny Han and Susan Colasanti will devour this one. --AJB
Posted by Oxford Public Library Teen Picks at 12:03 PM No comments:

Hey Teens! You know those blue tickets you've been collecting all summer long? The Teen Summer Reading Prize Bookstore is now open for business! That means, now is time to put those tickets to use!

We have awesome books, buttons, craft kits for the crafts we made this summer, and more! Stop by and spend, spend, spend those tickets!
Posted by Oxford Public Library Teen Picks at 6:32 PM No comments:

You and Me and Him, by Kris Dinnison 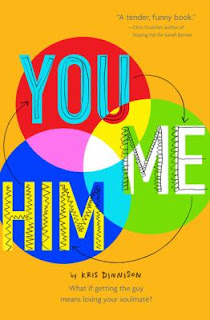 You and Me and Him, by Kris Dinnison is a very real story about friendship and first love.

Neither Maggie or Nash are popular at their school. She's overweight (but "not one of those shrinking violet fat girls") and he's openly gay. Perhaps it is their outsider status that has brought them together, perhaps it's something more. Either way, the two are best friends until the end. And Maggie always thought nothing could change that. Then Tom moves to town, and Maggie and Nash both fall for him. Will a guy come between these BFFs? Or will their friendship prevail?

The Verdict:
The story was very enjoyable. Maggie is a strong, likable character, and I found myself rooting for her (I always love an underdog I can root for!). My only complaint is I felt Nash's side of the story was lacking, and the book might have been even better written using alternating viewpoints. Either way, it's a great read and we at OPL Teen very much recommend it!

You and Me and Him can currently be found on the New shelf.--AJB
Posted by Oxford Public Library Teen Picks at 10:33 AM No comments: 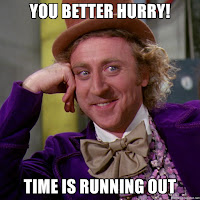 Attention! Saturday July 25 (that's this weekend!) is the LAST DAY to earn tickets to spend in the Teen Prize Bookstore. So NOW is the time to turn in any book reviews or collect points for completing Bingo sheet activities.

The Prize Bookstore will be open July 27 thru August 1. During this time, you can use the tickets you earned throughout Teen Summer Reading to purchase books, DIY craft packets, and other cool prizes. Stop by and see all the cool things we'll have for "sale."

p.s. We are also still looking for teen volunteers to work the bookstore. So if you're still in need of volunteer hours, please stop by the Teen Desk and sign up.
Posted by Oxford Public Library Teen Picks at 1:22 PM No comments:

The August calendar is now available at the teen desk for you to sign up to work a shift or two if you like.
We really appreciate your help :)