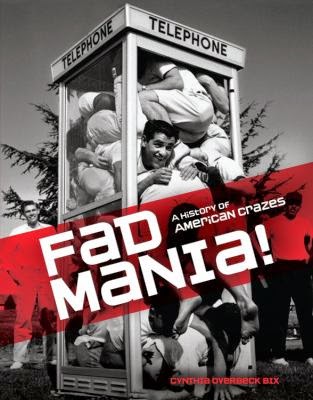 Hula Hoops, Lava Lamps, Disco, Packman, Furby, Flannel, Flash Mobs, Silly Bandz, Prom Proposals... What do these things have in common? The answer is they were all fads at one point in time. That is, something you and all your friends HAD to have or HAD to do because, well, everyone was doing it!

Fad Mania: A Story of American Crazes, by Cynthia Overbeck Bix explores the biggest, hottest trends of the past century. Mixed in with large and colorful photos, she talks about what these trends were, where they originated, what made them popular, how long they lasted, and, finally, if they returned (updated, of course) decades later to put demands on a whole new generation of teens. Fad Mania is so interesting and so much fun you'll forget you're actually reading a history book!

And, if you liked Fad Mania, you'll love Connie Willis' Bellwether, a science-inspired romantic comedy about what happens when a researcher studying the origin of trends pairs up with a scientist studying chaos theory. Add a heated competition for a million-dollar research grant, a flock of renegade sheep, and a punk-rock assistant who can't get anything right. Mix that with some Office Space-type humor, and you've got the ideal formula for romantic chemistry. Just awesome! --AJB

p.s. for a limited time only, we'll be featuring this pairing (and other fiction/nonfiction pairings) on a special display on top of the New Book Shelf.
Posted by Oxford Public Library Teen Picks at 11:07 AM