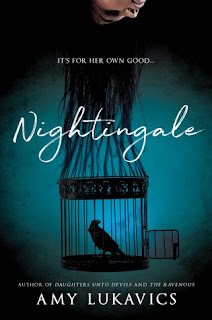 When I first read the description of Nightingale, I knew that it would be a book that I added to the collection.  It sounded right up my alley.  1950's, not wanting to conform to the norm, wanting to be a writer.  Then add the insane asylum (an iffy trope for me) and something that sounds like maybe cannibalism and I knew that I would have to read this.

Nightingale goes back and forth in time, dividing this time into "the institution" and "days past".  We learn that June is in the institution because she believes that her parents have been replaced.  Leading up to this incident, June has been under a lot of stress.  She has been writing a horrific sci-fi novel and wants to be published someday.  While her parents map out the perfect future for her with her father's boss's son, June has secretly applied to a writing program.  But the morning after her disaster of an engagement party, June's mother calls her "nightingale" and June is sure that her parents are no longer her parents.

Shipped away to Burrow Place Asylum, June finds herself in a strange kind of nightmare.  She befriends her roommate, Eleanor, who thinks that she is dead, and Eleanor's friends and quickly discovers that things are not normal here.  The nurses and doctor seem off.  The medical treatments are brutal.  The sanitation is questionable at best.  Even worse, when someone speaks up they are bound to disappear or die.  Can June unravel the mystery of the asylum and of herself in time to save them all?

I was surprised by the direction this one took.  It definitely had a twist that I should have seen coming but didn't.  I don't know what was more horrifying: the institution or watching June being forced into a mold at home.  This was a great read and much more horror than I expected. -RYQ
Posted by Oxford Public Library Teen Picks at 12:04 PM