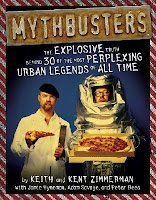 Is it possible to survive being buried alive? If caught in the rain, is it better to run or walk to a dry destination? Do you really test positive for drugs after eating a poppy seed bagel? Does the elusive and messy Brown Note really exist? The mad (scientist) men of the popular TV show Mythbusters, Adam Savage and Jamie Hyneman, put these and many more myths to the test in Mythbusters: The Explosive Truth Behind 30 of the Most Perplexing Urban Legends of All Time. Although these full-color write-ups are taken directly from the far more explosively exciting Discovery Channel episodes, they're entertaining in their own right. Plus there's previously unreleased bios on the show's two hosts, giving readers an insider's account on what makes these two tick. So if you're a fan of the TV show, you'll probably want to check this book out. If you've never seen the show before, what are you waiting for? Check it out!