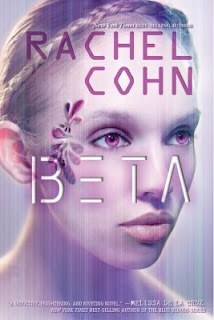 Beta is written by Rachel Cohn and so far I thought this book was quite fascinating! Rachel Cohn presents readers a Utopian society existing on an island engineered to be paradise on earth. Humans aren't bothered with trivial things like work, only luxury and leisure. Instead, the work is done by clones - servants cloned from the recently deceased. Void of souls and feelings, they are perfect for a life of servitude. Elysia is a beta clone - one of the first few teenage clones in existence with a rampant threat of defects. On the island of perfection, defects mean death. But Elysia isn't like other clones. She can taste food. She can remember memories from her first's life. She learns that there are others out there, others who are planning a revolution. Elysia must choose her side, and risk everything in order to claim what clones were never meant to have - a life of her own.

I do not know much about science but I felt that the explanation and the process of clone-making was thought out but slightly confusing in the beginning. Cohn does a remarkable job in describing the Utopian world and her world actually makes sense. The entire novel takes place on Demesne, the human-engineered paradise, with a brief mentions of other cities. *JK*
Posted by Oxford Public Library Teen Picks at 4:01 PM