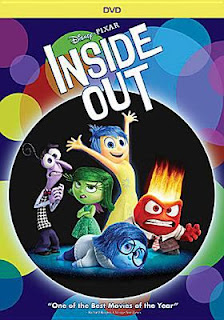 Ever wonder what goes on inside some peoples' heads to make them do what they do or act a certain way? Disney/Pixar explores this idea in their latest animated movie, Inside Out (now on DVD and located in the "new" section of the Teen Movies). In this adorable film, emotions are personified as characters who work in Headquarters (get it? HEADquarters?) and influence how people respond to the world around them.

Riley, 11, has been happy most of her life. And its no wonder, what with Joy dominating the controls and keeping the other emotions (Fear, Anger, Disgust, and her arch rival Sadness) from getting any work done. Joy works hard to make sure most of Riley's experiences and memories--particularly the all-important Core Memories--are happy ones. This job gets tougher when Riley's family moves across the country and things immediately begin to go wrong, from a delayed moving van to Riley embarrassing herself by crying at school. When Joy tries to prevent a Sad Core Memory from being stored in Long Term, she and Sadness find themselves trapped far outside Headquarters. As the two opposite emotions wander the maze of storage shelves that make up Riley's long-term memory, searching for a way back, the remaining emotions back at Headquarters try unsuccessfully to keep Riley's life from going off the rails ("what would Joy do?"). Fortunately Joy and Sadness make it back to Headquarters just in time, thanks to the aid of a very special character. The two opposites also learn a new appreciation for each other's work and how much they really need each other to keep Riley's life balanced. Along the way the audience gets a peek inside Headquarters of Riley's parents, teachers, peers, and some neighborhood critters.

Inside Out may not have been my favorite Disney/Pixar movie (that title still belongs to Up), but I thought it was cute and entertaining and creative with the perfect blend of humor, suspense, adventure, and warm fuzzies. I mean, DUH! Of course it's all of that. It IS Disney after all. Inside Out is definitely a must watch.--AJB

p.s. After watching Inside Out, my faith in Disney has been restored and I'm willing to forgive the disaster that was Tomorrowland.

p.p.s. I should note that Lava, the Short Film included in the Bonus Features of the disc was pretty weird. It featured a lonely volcano (which looked uncannily like Jaba the Hut) who only wanted some company. He gets his wish, eventually, but there's an ironic twist before the traditonal Disney Happily Ever After Ending. The concept was a cute one, but the main animated characters came off as kind of creepy. Watch the movie, but skip this short film.
Posted by Oxford Public Library Teen Picks at 1:20 PM