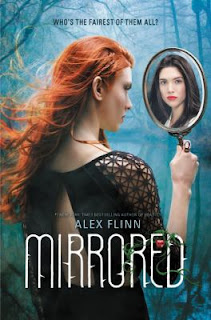 Fairy tale retellings can be hit or miss, especially the ones updated for modern times (cars, Facebook, cell phones, and whatnot). Which is why I approached Alex Flinn's newest novel, Mirrored, with caution. I loved what she did with her Beauty and the Beast retelling, Beastly (loved the book, hated the movie). Kiss in Time was a cute fish out of water story. But Towering (Rapunzel) was only sort of "Meh," but that's because the characters and their insta-love relationship were kind of "meh." I didn't dislike it, but it wasn't memorable like Beastly. On the other hand, I didn't much care for Cloaked or Bewitching simply because they tried to be too much. The fairy tale mash-up thing didn't work as well as when Flinn stuck with one story on which to build off.

I'd been circling Mirrored, a Snow White revamp as told, at least in part, from the P.O.V. of the "Wicked Stepmother," ever since it first appeared my Book Radar back in late 2013. Based on past experience with Flinn's retellings, I wasn't certain about it.  It could be just another book, another retelling, that I read and then forget. On the other hand, it could be awesome. After all, we were getting (part of) the story from the supposed villain, just like with Beastly. Perhaps we'd understand why the Wicked Stepmother was so wicked. Or maybe she wasn't wicked after all. Maybe... Maybe it would be the Snow White character who was truly the evil one (that would be a fabulous twist, wouldn't it?). So many possibilities. So many expectations.

Well...some of that was true. Mirrored focused, at first, on Violet, a homely and bullied girl who, with the aid of Kendra (of Beastly fame), discovered she had witchy powers. Powers that could change her life. Of course she abuses these powers, using them to make herself beautiful and to get Carrieesque revenge on her enemies. Particularly mean-girl Jennifer, who ended up dating and, eventually, marrying Greg,  the the guy Violet had a near-obsessive crush on. Flash forward several years and the P.O.V. jumps to Celine, the daughter of Jennifer and Greg. Jennifer has been killed in a freak accident (a freak accident caused by guess who) and Greg has been bewitched to remarry none other than Violet. Things are peachy at first...until Celine begins to grow up and become a beauty. Jealous, Violet turns her rage on poor Celine. And things progress from there. There's a dwarf. There's a "prince" type character. There's a rescue. And a kiss. And there's the true love/happily ever after. I didn't like Mirrored as well as Beastly, but I enjoyed it.

p.s. I wonder if Flinn will try to revamp The Snow Queen next. Jump on the Frozen bandwagon, so to speak (really, I kind of hope she doesn't).

Posted by Oxford Public Library Teen Picks at 10:50 AM