The Bone Queen, by Allison Croggon

Prequels seem to be a thing lately. 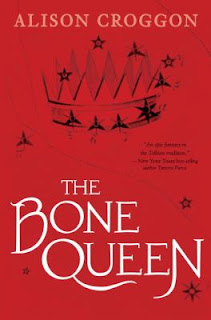 Alice Hoffman recently released a prequel to Practical Magic (which inspired a 1990s movie), all about the old Aunts. Philip Pullman just published The Book of Dust, which is set several years before the events of The Golden Compass trilogy. And Laini Taylor wrote A Night of Cake & Puppets, a companion to Daughter of Smoke & Bone that casts the spotlight on a swoonworthy romance between two popular side characters. Seems authors are anxious to tell what happened before, and fans of the original books are gobbling it up. And these are but a few examples of this seemingly popular trend.

Another is The Bone Queen, the latest novel by Alison Croggon. This new novel is set several decades before the author's Books of Pellinor quartet (The Naming, The Riddle, The Crow & The Singing) and focuses on events only hinted at in the series. The Bone Queen focuses on Cadvan of Lirigon's early years, before he was mentor to Chosen One Maerad of Pellinor. Still a young magician, Cadvan is lured to the Dark Side by the promise of powers greater than he could ever learn at the Schools of the Light. In doing so, he unleashes a terrible evil upon the land. Cadvan must regain the trust of his friends if he is to banish this evil back to the Abyss from which it came. But he knows that, even if he is successful, things will never be the same.

Although not as awesome as the original series, The Bone Queen was still amazing. Written in Croggon's Tolkienesque style, which includes incredible world-building, and appendix, and detailed notes on the text, this story gives fans of the Pellinor series some insight into a key character. Those new to the author's books will enjoy it too, but not as much as those who already have a background about this world.

As for me, I liked this book. It makes me want to re-read the original quarted, which I'm sure I will enjoy even more now that I have more backstory to work with. --AJB
Posted by Oxford Public Library Teen Picks at 1:31 PM