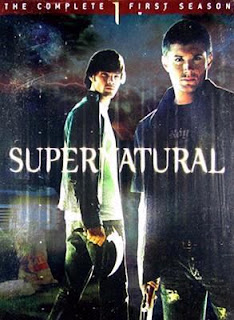 No fewer than 10 people have told me I have to watch Supernatural, a (thus-far) 13-Season epic that is about two brothers who investigate ghosties, ghoulies, monsters, and other things that go bump in the night.

Sounded to me like a modern day riff on X-Files. A show which I love, by the way. So my saying that is actually a good thing.

Well, the other day, I was in need of something new to watch. And, being that it's October, I wanted something on the creepy/weird end of the viewing spectrum. I picked up Supernatural because, well... because I was curious and because I was running out of excuses of what to tell all those people who kept asking me why I hadn't checked out the show yet.

So I watched the first few episodes of Season 1. And so far so good. I like. But not gonna lie. I was correct in my initial reaction: It IS very, very X-Files.  Almost to the point I can hear that well-known theme song being played as I watch. I'd say Supernatural is more Monster of the Week rather than Mythology, but very X-Files nonetheless. Here we have Sam and Dean, two brothers who both lost loved ones due to mysterious and paranormal circumstances (compare to X-Files: Each of the main characters lost someone in to similarly unexplainable ways and they are each searching for a family member who mysteriously disappeared). They team up to hunt creatures whose existance The Man and/or society would rather deny (compare with X-Files: need I say more?). Good times.

In fact, I only have one complaint about the show so far. And that is, the show is in desperate, desperate need of a strong female character. Not a romantic interest, per se, but a Hermione Granger/Dana Scully type of character. A "no B.S." type to play devil's advocate and keep a cool, rational head when the brothers are in danger of going off the deep end. Perhaps this gets remedied later on in the show. I certainly hope so.

But I do like Supernatural. So far. I plan to watch a few more episodes and see where it goes. --AJB
Posted by Oxford Public Library Teen Picks at 2:47 PM