The Rise of the Isle of the Lost, by Melissa De La Cruz (Tween) 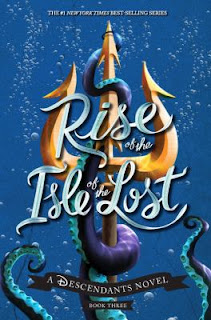 I will always be a Disney girl at heart. If you're like me, you'll want to devour this Descendants series and even watch the Disney movies. Each volume adds at least one new character who is a descendant of one of the Disney movie characters. The Rise of the Isle of the Lost introduces us to Ursula's daughter. I'm a BIG mermaid fan, and The Little Mermaid happens to be my all-time favorite movie, so I was very excited to get my hands on this book! There is very little of the actual mermaids though, so don't get your hopes up too much for them. There is also our favorites from the first books, Mal, Evie, Jay, Carlos, and of course, Ben. And, as with the others in the series, the villain kids end up managing to become involved in all that's going wrong in the kingdom and the Isle of the Lost.

I love how each book has a new problem to solve, but doesn't take away from the overall journey that the kids from the Isle are going through in their attempt to be good. We get a continuing story of their lives, but also the new drama by adding new characters and new drama. I hope the author continues to write more of this series, and I wouldn't be sad to have more of the movies as well. *JK*
Posted by Oxford Public Library Teen Picks at 11:18 AM