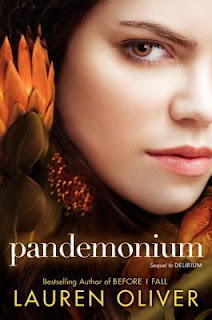 Teen reviewer Annie just finished Pandemonium, by Lauren Oliver (the sequel to Delirium), and she enjoyed it--although perhaps not as much as she might have. Here is her review:

In Pandemonium by Lauren Oliver, Lena Haloway is forced to deal with many things at once: Facing the supposed death of Alex, the many troubles living in the Wilds causes, and the possibility she's falling in love with someone else. Overall, the book was very enticing and easy to read.

The book was told in a very simple and unique style, with the chapters alternating between "then" and "now," meaning the period of time right after Lena makes it to the Wilds and the period of time months after in which she's living in Brooklyn. It was very entertaining to keep up with two stories happening simultaneously. Both were captivating in the sense that I was eager to turn the page. Watching Lena's transformation and living it with her afterwards at the same time was intriguing.

However, I did miss a little of what happened in the middle. I wanted to know how Lena made it into the city. We're told throughout the series that there are many invalids living undercover in different cities. They get supplies from the Wilds and other invalids and, due to recent events, they spy. Lena's mission was to watch the DFA (Deliria-Free America) meeting. But who gave her this mission? How did Lena, Raven, and Tack all make it to Brooklyn? I wanted Lena's perspective on the difficulties of doing just that.

The book itself was not my favorite of the series, mainly because I feel that Lena turned into too much of a harder version of herself. She didn't even seem like the same person from the first book, Delirium. There were barely traces of that Lena. Raven told her she had to erase her past, but if Lena really did care for Alex and her cousin Grace, why was that so easy for her to do? Why was it so easy for her to begin to love the son of the founder of the DFA, Julian? Regardless of whether Alex was dead or not, her memories of him didn't seem like ones that could be easily forgotten. And as for Grace, she was the one who helped Lena escape in the first place. Lena literally left her behind when she took off. How could all of that just be wiped from her memory? Was it even important to her in the first place?

I do believe the book was very well written, because the way Oliver can pull you into a world is incredible. In every chapter of Pandemonium I felt like I was being coaxed further and further into Lena's position and her world. Lena had to be reborn into the Wilds. I felt like I was being reborn too. Pandemonium is a thrilling and magnetic sequel to Delirium, and fans of the series will not be disappointed.