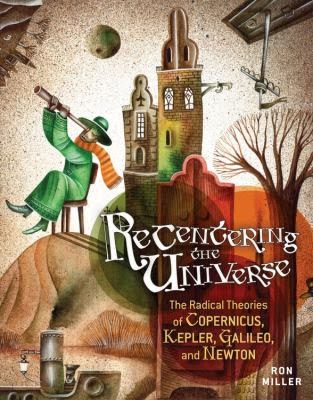 Did you know that, hundreds of years ago, people not only thought the Earth was flat, but believed it was the center of the universe (obviously a very small universe), around which rotated the sun, moon, and stars. They also thought the moon produced its own light. Some even went so far as to believe that rain and snow poured through openings in the sky, which randomly opened and closed (much like windows or doors). According to Recentering the Universe, by Ron Miller, this was the case.

Laugh it up (I did). But this doesn't mean people were dumber back then. They were just ill-informed. And, what's more, they didn't have the means to educate themselves on the scientific awesomeness that was (and still is) the reality of life, the universe, and everything. Okay, just the Universe. Remember, Google didn't exist back then. These views had worked for thousands of years, and people didn't realize how broken they were... so they didn't try to fix them. As for any new ideas and views... Well, that pretty much freaked people out. Not only that, questioning the old ways was pretty much illegal.

Enter Copernicus, Kepler, Galileo, and Newton. The original Mythbusters. Using charts, math, telescopic lenses, and other cool gadgets, these guys totally "Busted" those ancient ideas about flat worlds and an Earth-centered universe. Of course these early astronomers weren't as popular as Adam Savage and Jamie Hyneman. In fact, most people hated them. The church even went so far as to head-up a "witch hunt" or two. This was NOT a good time to be a Mythbuster.

But then something cool happened.

They looked at the evidence and said, "Hey, this actually seems legit."

Old ideas were retired (by some, very reluctantly), but no one could deny the scientific proof that there was something to these new universal theories.

Today, with our space explorations, Mars rovers, and far-reaching telescopes, the ideas early astronomers worked so hard to prove are common knowledge and the whole flat Earth theory is something to joke about (OMG! Did people really think that way? LOL!). Check out Recentering the Universe for a detailed account on how the views of the universe changed over time. Even better, everything's presented in a way that's NOT textbook-like. So you don't feel like you're doing homework by reading it.

What's next? Aliens? Life on other planets? Maybe...