Across the Universe (DVD)

By now it's probably no secret that I'm a Beatles fan. I play a Paul McCartney style bass guitar and even named two of the characters in my quarterly Winston's World cartoon after members of the band. So when I discovered the Beatles-inspired musical Across the Universe (PG-13, 2007), of course I had to watch it! 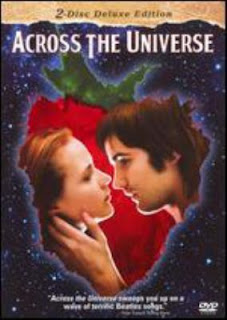 I was not disappointed. This film is amazing!

Set in the late 1960s, the story centers on Jude, a young man from Liverpool who travels to the U.S. to find his estranged father. Jude befriends college dropout Max and falls in love with Max's sister, Lucy. The trio travels to New York City and moves in with aspiring singer Sadie, her guitarist boyfriend Jo-Jo, and teen runaway Prudence. Then Max is drafted and Lucy, who already lost her high school boyfriend to the war, becomes involved with a group of anti-war extremists. Can love and friendship survive all this drama?

This type of musical is always tricky. So much can go wrong. Especially when songs I like are involved. Although I actually liked Rock of Ages, I hated Moulin Rouge, and there are songs I no longer enjoy listening to because the film versions ruined things for me. But Across the Universe is perhaps the best-case scenario for this type of film. You can tell the writers had a deep respect for the music and took great care that the adaptions were exceptionally well-done. Some even surpass the original. For example, the film version of "Let it Be"...just thinking about it gives me chills. Even better, every single actor can sing! I should also mention that those familiar with Beatles music will find dozens of little "Easter Eggs" squirreled away throughout the film (which made watching even more fun).

Across the Universe captures the mood of the era, from the "peace and love" movement to anti-war protests to the war itself. It is a well-done bit of historical fiction in addition to being entertaining. The plot is engaging and the characters are the sort you will be rooting for. I'll also mention that the cast is very diverse, because I know that's an important issue these days. A word of caution: There are some mature situations and topics touched upon in the film, although nothing is exceptionally graphic.

Overall, Across the Universe was a truly amazing cinematic experience. I would recommend it to fans of musicals and history alike. --AJB
Posted by Oxford Public Library Teen Picks at 1:17 PM