Based on the novel by Lloyd Alexander comes Disney's The Black Cauldron, a creepy offering if there ever was one. 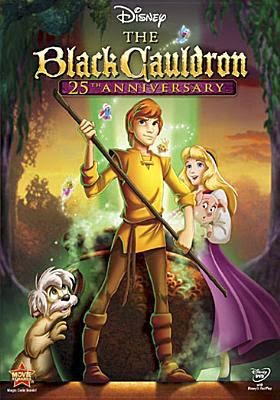 Despite the lighthearted beginning, which shows singing birds and a big-eyed piglet who gives new meaning to cute (pure Disney fluff), this film turns very dark very quickly. The piggie, who is psychic, is intrusted to teenage Taran because she (the pig) is the only one who can show the whereabouts of the legendary and infamous Black Cauldron. The Cauldron can give whoever possesses it the power to create an army of unstoppable undead minions. Taran must take his swine charge someplace safe... but she gets abducted by some very evil looking dragons and taken to the palace of the evil Horned King, who desires the Cauldron and its powers. Why? Because he's evil and wants Power, I suppose (the motives were never very clear). Taran follows and ends up in the dungeon, where he is rescued by a Princess Eilonwy and her magical color-changing bubble. The pair, along with an aging musician, escape. They are joined by the furry, but cowardly Gurgi, who latches onto Taran. They encounter a trio of cauldron-hording witches and trade a magic sword Taran swiped from the dungeon for the Cauldron....which the Horned King quickly steals. Everyone but Gurgi (who runs away and hides) is dragged away by hulking soldiers. The undead army is created, but is stopped even before it crosses the drawbridge when Girgi, in a fit of serious angst, hurls himself into the Cauldron, stopping it's powers. The Horned King is destroyed, the Cauldron is no more, and the land is saved. Huzzah!

History lesson: The Black Cauldron was Disney's first animated film to receive a PG rating because of some scary scenes, some seriously depressing stuff (OMG! Gurgi's "I have No Friends/Nobody Loves Me" speech preceding the cauldron dive), and intense action. And I guess it was even creepier and darker, originally, having been heavily edited before it hit the theaters.

The Verdict: The story was pretty entertaining, although the movie was more Don Bluth than Disney (if I didn't know it was Disney, I'd never have guessed). The animation style, the choice of story/plot... I don't know. It just wasn't Disney style. Also, the fact that it was edited extensively showed: A minor detail here, but I kept wondering what the heck happened to Eilonwy's magic bubble companion. It was with her throughout the entire dungeon scene, and seemed an important thing, but vanished after the escape. It appeared briefly in the witches' cottage, but then disappeared again. (Guess a bubble--even a magic one--isn't a very cool sidekick. Unless you're SpongeBob Squarepants. Still, being a librarian, I'm a stickler for consistency).

If you're planning to rent this film, don't do so expecting catchy tunes, talking animals, or, really, anything stereotypically Disney. The Black Cauldron is a different thing entirely. But sometimes different is a good thing. If the Horned King had broken into song, he'd totlly have lost all bad-guy credibility. --AJB

p.s. For more creeptastic Disney stuff, rent The Watcher in the Woods.

p.p.s. What the heck is Gurgi supposed to be?
Posted by Oxford Public Library Teen Picks at 8:50 PM