Meet Me in the Strange by Leander Watts 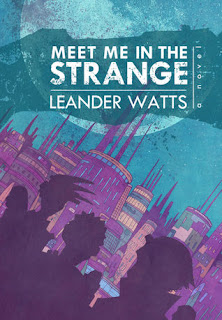 Watts crafts a world that is much different from our own without feeling completely otherworldly.  The city where most of the action takes place is some kind of holy city and there is talk of the New World without there ever being any real explanation of what the New World is.  The whole book has a surreal, otherworldly 1970's feel to it.  Django Conn, the rock star that everyone loves, definitely feels like Bowie and the fashions that he's ushered in fit the glam rock scene too and there is a lot of talk about the moon landing and what it might mean.

Davi has always lived in the Angelus Hotel.  His family has owned it for generations and there he has access to almost anything he could want.  He spends his time listening to music in his room and coming and going as he please, him and his sister having chased off any tutors long ago.  When Davi goes to the Django Conn concert, he spots a girl who is completely lost in the music and he can't help but feel like they are the only two people who really get it.  When the girl, Anna Z, shows up with Davi's sister's boyfriend, Davi follows her, desperate to find out who she is.  Anna Z is unlike anyone Davi has ever met before.  She talk-talk-talks about strange things until they seem to be the absolute truth.  But Anna Z is trying to escape and she needs Davi to be more than he ever has in order to free her.

This was an iffy book for me.  It was short and had short chapters, which I loved, and it reminded me a lot of Francesca Lia Block, which is honestly what kept me reading.  There was a lot here and I would like to see it with more ratings and reviews because I definitely think it's worth the read.  However, I was a little put off by the portrayal of Anna Z.  She's almost the definition of a "manic pixie dream girl" but I still liked her as a character.  I liked this book enough that I would like to seek out some more of Watts in the future but it is definitely an acquired taste.  Read it if you love music enough to think it's everything and don't mind a few strange ideas being twisted page after page. -RYQ
Posted by Oxford Public Library Teen Picks at 12:39 PM